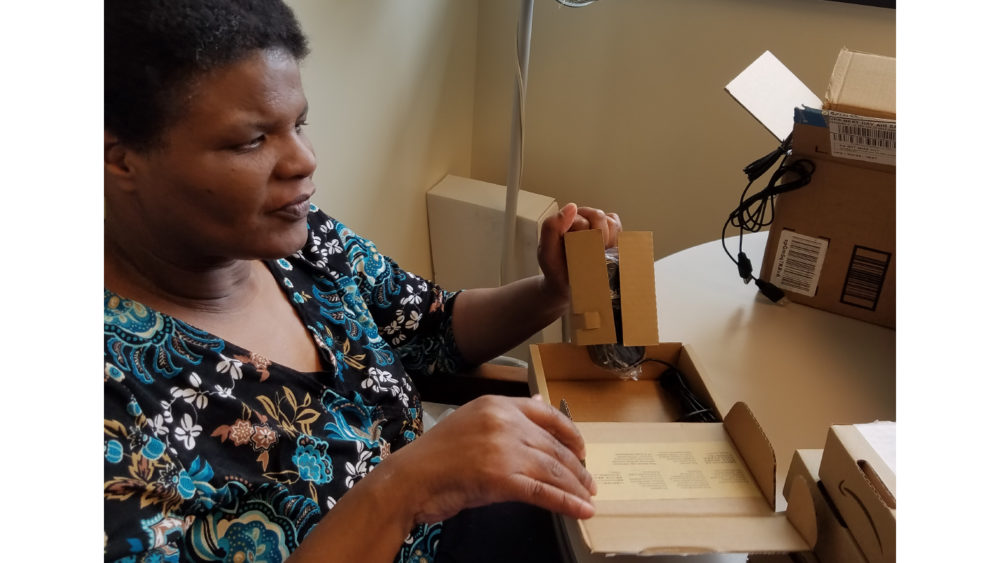 TransCen is now providing employment-related service to individuals with disabilities in Wisconsin! Our President, Laura Owens, founded Creative Employment Opportunities (CEO) in Milwaukee, WI in 1991. Because CEO’s and TransCen’s missions so perfectly align, CEO became part of TransCen in January 2017!

Mattie was CEO’s first client, 27 years ago. Mattie is deaf-blind and was raised by her grandparents. Unfortunately, as her grandparents aged, they could no longer take care of her, so Mattie was placed in an institution in Madison, WI.

While living in the institution, Mattie attended Madison West High School. Her teacher, Alice Udvari-Solner, believed in Mattie and taught her tactile symbols and sign language for communication. While in high school, Mattie learned to swim, cook, and had a variety of in-school jobs. Alice became Mattie’s guardian and when Mattie graduated from high school, she moved to Milwaukee. Alice knew Laura and CEO, and requested that Mattie receive employment services from CEO.

CEO’s staff uses a combination of signing (based on ASL), tactile symbols, and hand-over-hand systematic instruction to teach Mattie the various tasks she does on her job. Each task is broken down into steps.

Mattie’s first job was at Pizza Hut where she worked for 18 years before being laid off (she outlived 10 managers!). Her many duties included making pizza sauce, making boxes and putting labels on them, filling the salad bar and cleaning the door windows (given her systematic way of cleaning the windows, she was the best window washer they had!). Mattie is currently working as a clerical assistant for the Menomonee Falls School District (a suburb of Milwaukee) in the district office. She performs various clerical/production-type tasks including collating mail, unpacking supplies, putting together files, and much more.

Mattie loves to work and enjoys being busy. This is apparent through her body language, vocalizations, and big smile when she is at work. She tries out every task that has that is introduced to her and we can tell she likes some tasks more than others.