We are celebrating our third TransCen newsletter with a story and information from our ADA Center team:

TransCen has operated the Mid-Atlantic ADA Center since 1996. Funded by the National Institute on Disability, Independent Living, and Rehabilitation Research within the U.S. Department of Health and Human Services and one of the 10 regional ADA Centers that that comprise the ADA National Network. The Mid-Atlantic ADA Center provides information, guidance and training on the Americans with Disabilities Act in order to support the mission of the ADA to “assure equality of opportunity, full participation, independent living, and economic self-sufficiency for individuals with disabilities.” Though federally funded, the ADA Center is not an enforcement or regulatory agency, but a helpful resource for individuals and entities with rights and responsibilities under the ADA.

The ADA Center’s services, resources and activities include:
• Answering questions via toll-free information line or email
• Customized training tailored for specific audiences
• Webinars on hot ADA topics
• Twice-a-month E-bulletin & three-times-a-year ADA In Focus Newsletter Subscribe!
• Annual Conference on the Americans with Disabilities Act: Mid-Atlantic ADA Update
• ADA Leadership Network: A network of trainers throughout the Mid-Atlantic region who facilitate training and outreach on the ADA
• Access to other resources and trainings from the ADA National Network
• Useful resources include:

Learn more about the Mid-Atlantic ADA Center, its services and resources at ADAinfo.org or call 1-800-949-4232. 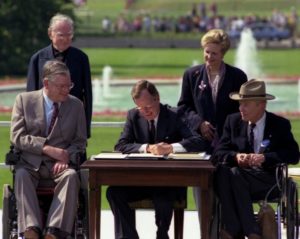 George H.W. Bush signed the ADA into law on July 26, 1990 after it passed both chambers of Congress with bipartisan support. The ADA is one of America’s most comprehensive pieces of civil rights legislation that prohibits discrimination and guarantees that people with disabilities have the same opportunities as everyone else to participate in the mainstream of American life — to enjoy employment opportunities, to purchase goods and services, and to participate in state and local government programs and services.

July 26, 2019 marks the 29th Anniversary of the signing of the Americans with Disabilities Act. The ADA Anniversary is an opportunity to celebrate the advances to access and inclusion that have occurred as a result of the landmark civil rights legislation.

Monday, July 22, 2019
Washington Nationals vs. Colorado Rockies
Pre-game recognition of the 29th Anniversary of the ADA and the work of the Mid-Atlantic ADA Center.

Tuesday, July 30, 2019
2:00 – 3:30 PM Eastern
Webinar: Reflections on the ADA: Past, Present and Future
A conversation about the ADA with disability rights attorney and former chief of the Department of Justice’s Disability Rights Section, John Wodatch and former Mid-Atlantic ADA Center director, Marian Vessels.

Part 3: Assessing the Economic Impact and Benefit of Your Employment Programs
August 6th, 2 pm to 3:30 pm eastern
This webinar will provide tools and strategies to assess the economic impact that an employment program has on its employer customer base. The information gathered from employers can be used to strengthen the relationship and foster new customers. Employment Consultants will be given the tools to replicate a national study with employers in their community and better define the value of their employment services.

About the Trainer: Dale Verstegen,

A Senior Research Associate at TransCen, Mr. Verstegen is assigned to a range of research, training, and technical assistance projects related to transition and employment services. Mr. Verstegen provides consultation and training in the areas of program development, performance management, marketing, and job development. Mr. Verstegen has developed curricula and provided training on supported and customized employment for a wide range of universities and state agencies. He has also provided field-based technical assistance to hundreds of Employment Consultants and Transition Specialists throughout the country in the area of job development and employer partnerships. Given his business background and having been an employer, Mr. Verstegen has focused his research, writing, and trainings on the provision of employment services to the employer community. Mr. Verstegen has his Masters in Business Administration from the University of Wisconsin – Madison and is currently the President of the Board of Directors of the Association of Community Rehabilitation Educators (ACRE).

The Mid-Atlantic ADA Update is an annual conference dedicated to the Americans with Disabilities Act. 2019 will mark the 26th year of the conference which will be held in Philadelphia on November 14-15. A pre-conference session, “ADA Overview” is offered on Wednesday, November 13 for those new to the ADA or anyone wanting a refresher on the law.

The conference will begin with two plenary panel sessions that focus broadly on the ADA. The first will be a panel of influential people in the Philadelphia area including the city’s ADA Coordinator and the CEO of the Sierra Group. The second panel will include representatives from the U.S. Department of Justice, U.S. Equal Employment Opportunity Commission, U.S. Access Board, and the U.S. Department of Transportation, Federal Transit Administration who will provide updates on their agency’s activities over the past year.

The ADA Update features tracks of sessions that are crafted for specific audiences. This year’s tracks are designed for employers and human resource professionals, state and local government officials and those working in ADA-related jobs, disability services professionals in post-secondary education, and anyone working in detention and corrections who needs to know about how the ADA applies to correctional facilities. Anyone who is not in one of these roles, but who wants to learn more about these topic areas, is also encouraged to attend. Participants will choose from six topical tracks with over thirty sessions. Some tracks will be focused on essential ADA concepts such as reasonable accommodation, effective communication, program access, and obtaining medical information. Other tracks will feature a selection of special topics such as how to design accessible playgrounds, how the opioid crisis is affecting employment, and how the ADA applies to Planned Parenthood.

The 2019 ADA Update will offer professional development hours for several accreditation organizations as well as a general certificate of participation. An exhibit area will feature an array of vendors showcasing their products and services. The conference will offer multiple opportunities to meet and connect with other professionals with similar jobs and interests. Past participants have noted that networking is one of their favorite features of the ADA Update.

To learn more about the conference visit ADAUpdate.org. Registration is scheduled to open in August. You can receive advance notice of registration availability by sending an email to ADAtraining@transcen.org, include “2019 ADA Update” in the subject field. 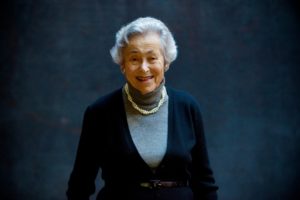 Margit leaves quite a legacy for all of us who are part of the TransCen team.
As Margit said, “…and you have to understand: What you do really matters.”
TransCen Founder & Board Member
“When people see injustice or prejudice or scapegoating or bullying, they have to intervene…They can’t say it doesn’t matter. One has to make an effort to create a better world since I am not going to be around forever.”

Margit, Thank You!
We’ll miss you

Our work is driven by the belief that there is a job for everyone who wants one, regardless of the nature of their disability, or other barriers to employment, their need for workplace support and accommodation, or economic circumstance.

Help Us Make a Difference 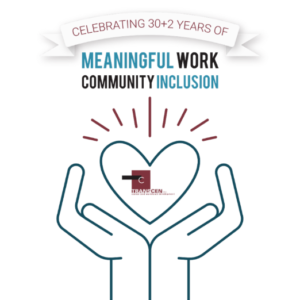 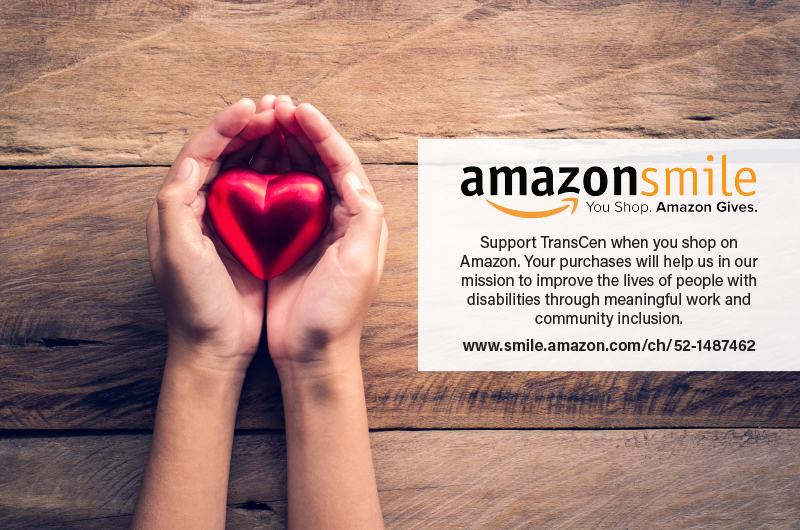